Somewhere this Business Model generated  16 billion worth of euros. It’s astonishing.  Which factors made that difference? Read on. Make possible, the impossible.

Imagine being a small Italian clothing manufacturer. Your factory makes clothes for everyone, you have an affordable price, sold to the public through mono brand shops. Now imagine that you want to get better results and go global. What would you do? Think about it …
Would you move the production to a low wages country? Would you increase advertising? Would you create a franchise? Right. You’ve chosen. What method did you employ?

Let’s take a real example how the number one‘s business model, the best in the world. Then we will start to ask ourselves: why? We’ll discover important things driving a successful business development.

A few lines about a company who knows a thing or two in clothing. It’s Inditex. ( and Here is Forbes list of the world’s biggest companies )

Inditex has humble origins. The story starts in Spain in 1963. Where Inditex was just a clothing manufacturer.

In 1975 the first Zara shop is opened. Between 1976 and 1983 nine new Zara shops open in Spain. The eighties are a hard time for textile and 40% of the workforce will loose it’s job in Europe. This is the moment when the most powerful business model in clothing is born. May 23rd 2001: Inditex goes public. At the time I am writing this post the shares are worth 523% in respect of the initial value. From 2000 to 2013 sales and profits grew 8 fold: in 2013 it was 16.7 billion euros sales and 2.4 billion profits. In 2013 Amancio Ortega, the founder, was the 3rd richest man on the planet. The future, for him, is still bright.

If you want to explore what’s in it for you, read on again, the top line. 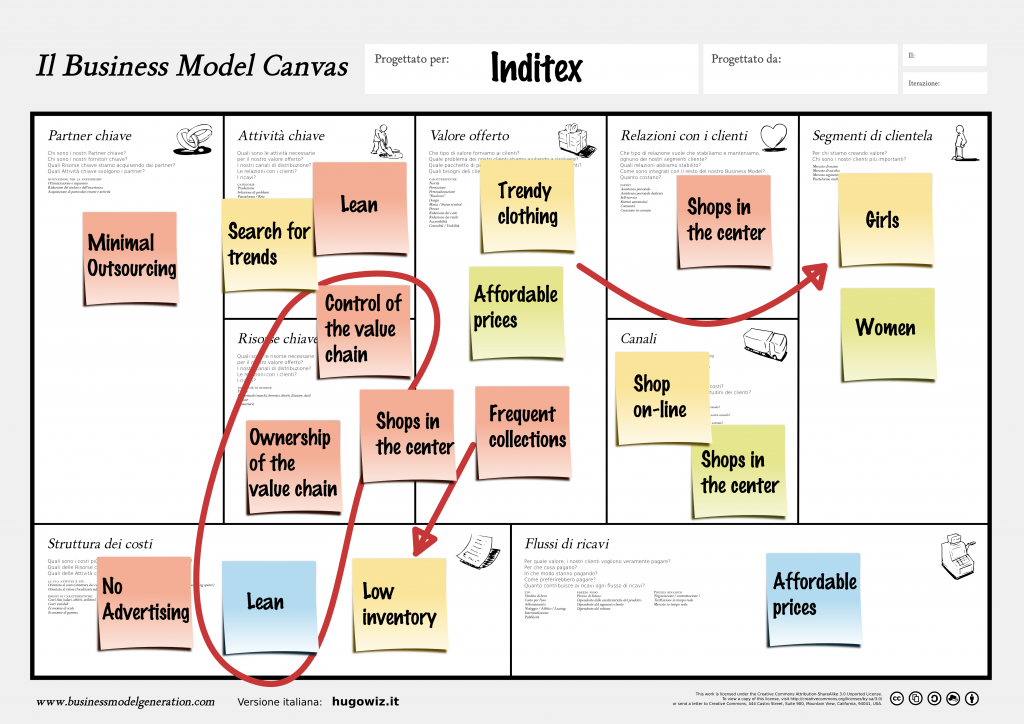 Inditex's Business Model is about the mass market. Customers are mostly women, though the offer for men isn't missing.

Inditex actually has a wide offer thanks to it's numerous brands: Zara, Massimo Dutti, Bershka, Stradivarius, Oysho, Uterque, Pull and Bear.
Those brands all have in common the offer of trendy clothing. Fashionable, the collections change very frequently. Prices are affordable.

Inditex leverages two main channels. The shops and the online channel, which is recent (2007).

The main relationships mean is the mono brand shop. The shops follow the specific brand format and are thought as an advertising and branding media. Inditex's shops are located in the center of big cities around the world. Today the relationship is also managed online. Inditex doesn't advertise.

Inditex's key resources are: the shops, owned by Inditex, and the production and logistics plants.

Key activities are interdependent. By one side, Inditex is very clever at discovering trends.  On the other side it's very fast at creating, producing, delivering always new clothes. The production model is Lean.

Inditex tends to keep strict control over it's production chain. It leverage less on outsourcing than the competitors. Key partners are geographically near to Inditex.

This Business Model is born out of a precise strategic choice: to offer the customer the clothes she wants, when she wants them. It seems bullshit, but this choice leads to consequences that have made Inditex the best in the world. The fact is that, beyond saying it, they believe in it and they do it. For Inditex, speed is the number one priority above and beyond even production costs.

The strategic choice to offer clothes the customer wants, when she wants them, has led Inditex to adopt the Lean approach to prodution. To speak, it's Toyota's approach. The one that brings to continuous improvement, small production batches, and pull logic. Pull logic is the one that mandates starting producing an item only if it has been requested by the customer: only when the order arrives. For instance, Dell produces a laptop only after the customer has bought it.  The same for Inditex. They produce clothes only when it's shops request them and make an order. Inditex is able to ship and deliver in 24 hours from the order in Europe and in 48 hours in the rest of the world. On average, a shop receives new goods and new clothing models twice a week. This explains why, for Inditex, it is important to keep a tight control over all the production process. In fact the group owns the majority of the production plants, raw materials included. The partners that saw and finish Inditex's garments, are in general geographically near to Inditex's headqarters and they receive almost all the raw materials from Inditex. So we have better explained why, in the key resources block, there are production and logistics. H&M, who is a competitor and is the second in the world, doesn't produce the garment it sells. Another important feature of the Lean approach are the small prodution batches. Every collection is produced in small quantities, then when a collection doesn't sell, because the customer doesn't like it,  the inventories are low. Only 15% - 20% of Inditex products are marked down, as opposed to 45% of H&M.

Small production batches are also key to producing much more collections so that the garments are always new and aligned with trends. In 2013 Inditex created more than 50,000 garments, designed by 500 designers, inspired by major trends and by customer feedback. The competitor's average is 1,200.

The most important consequences are that customers are tempted to visit the shops more often because there are always new collections and garments. Moreover the customer learns that she should immediately buy the garment she likes. In fact, because of the small production batches and of frequent collections, the garment that the customer is trying today will probably be sold out in two weeks never be sold anymore.

This is an important point for understanding Inditex's success. The customers visit the shops more often, from 4 to 5 times more often than competitor's average, and they buy more under the pressure of scarcity: I buy the garment I like now because in few days it will be sold out.

Inditex's second key resource are the shops. Almost all are owned by the group. At the end of 2013 Inditex owned 6,340 shops, that in general are located in the center of big cities, and 832 shops in franchise. Why are the shops important for Inditex? Obviously for selling the products, so we find them also in the Channels block, but also because they are the main customer relationship channel and Inditex wants to keep a strong control over it. For Inditex, the shops are the main sensor of customers taste and  trends. The collections are relentlessly adapted according to sales results measured at the shop and according to customer feedback. All the information gathered in the shop are communicated to the headquarter, where existing collections are modified and new ones are created.

Adopting this point of view, it is clear how the e-commerce fits into the strategy and into the Business Model. They represent another source for collecting information about trends. E-commerce statistics help learn what's liked with higher accuracy. Moreover, both shops and e-commerce are considered by Inditex as an advertising channel. The only one. Inditex doesn't advertise. No billboards, no adv in the magazines, no tv spots. It's a cost brought down to zero.

Now that we have understood the meaning of Inditex's Business Model, it's time to draw some lesson. The first lesson to learn is that the Business Model should come from the mission, the purpose of Inditex: "To offer the customer the clothes she wants, when she wants them". Choosing the Lean approach, choosing to own the production and logistics plants, choosing to own the shops, etc. are a consequence, that serves the mission. Also choosing not to advertise is coherent with Inditex's purpose. It doesn't make sense trying to push garments, and influence the public's taste, when your purpose is to understand which are the customer's tastes. Inditex's CEO says that their Business Model is the opposite of the traditional one. The traditional model is to design the collections in advance, usually 12 months earlier, and then try to sell the garments whether or not the customer like them. Inditex, first of all, tries to understand what is liked, then designs it, then produces it, then sells it.  Fast.

The second lesson is that Inditex Business Model is hard to copy. Inditex success is sensational and in plain sight. But competitors are not copying it. Why is it hard? Because Inditex does somethin new and different from the competition also in the left hand side of the Business Model Canvas: Key Resources, Key Activities, Key Partners and Costs. Those blocks are their barrier to entry.

The third lesson is that Inditex does something new in almost all the Business Model Canvas blocks. But the strength of the model doesn't rely on product innovation. On the contrary, the garments are the less innovative thing of all, actually they are copied from trends and by consequence also from competitor's garments. The innovation in the Value Proposition, in Inditex's business model, relies on other factors. In the Business Model Canvas, the Value Proposition means much more than the product.

The fourth lesson is that relocation and outsourcing aren't necessarily useful. To commit production to partners or relocate production in low wages countries does mean lose direct control on part of the value chain and can be detrimental.

The fifth and last lesson is that it is possible to build a business model that leads your company, your business, to be the number one in the world. Even in your country. Inditex started from Spain in the Galicia region, where there is nothing exceptional, on the contrary. You too can do it.

Good Business Modeling to Everyone